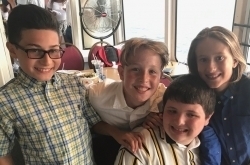 An Enriching Summer for Campers of All Abilities

Camp Twelve Trails’ inclusion program focuses on meeting the needs of all our campers by providing a supportive and caring environment. Teen Adventures, our teen program, is a perfect example of how inclusion not only benefits the campers who need additional support, but how inclusion leads to a richer experience for all campers and staff, benefiting the entire camp community.

Like the rest of Camp Twelve Trails, the inclusion program in Teen Adventures offers two levels of support. Level 1 is for those campers who need more “check in” support in order to level the playing field with their typical peers. Level 2 is for campers who require an experienced inclusion counselor dedicated to their support, accompanying them throughout the day and modifying activities to fit their needs. In addition, Teen Adventures requires another layer of planning to make sure we maintain the same standard of support because our teens travel on Tuesdays, Wednesdays, and Thursdays. Overnights and day trips hold much more potential for sensory overload, bullying, and many unpredictable outcomes. Teens in particular are concerned about what they perceive as “hand-holding” support; they do not want to feel limited or any different than the other campers. Therefore, for inclusion to seamlessly become part of Teen Adventures, it required months of thorough intakes, staff training, and amazingly dedicated counselors, all of which we had.

Preparation for the 17 inclusion teens was extensive. In our intake meetings with parents, we covered each camper’s strengths, dislikes, potential triggers, areas of accommodation, sensory challenges, school program accommodations and modifications, as well as social and emotional challenges. I carefully assessed each trip with parents to predict potential breakdowns and sensory overloads. This information was then used to develop staff information sheets. These sheets were diligently reviewed and discussed with all staff working with those 17 individuals. It was important for this information to become cemented in our program because when we controlled the environment, no one focused on differences. Prior to each trip we determined preventative actions so we were well-prepared for each new destination, from inconspicuous ear plugs and sensory putty, to hand gestures so campers could signal to their counselor that they needed a break.

Careful planning and preventive action were, as we found out, only pieces to a complete puzzle. Our amazing staff were critical to this, but the piece that really led to true inclusion were the teens themselves. Watching teens of all abilities playing a game and helping each other perform well without any modifications or accommodations was true testament to how supportive and welcoming the teens were.

Geoff’s experience provides a good example of this in action. Geoff is thirteen and entering 8th grade. Ten days before camp, his family moved to New York from Chicago. For Geoff, diagnosed with autism and symptoms of apraxia, this was a huge transition. He had attended the same camp in Chicago for many years. Ours was a whole new environment to get used to.

On the first day, Geoff walked into our teen shelter and began jumping up and down, flapping his hands, and screaming in a deep tone. When everyone was looking, he went up to a group of 7th grade girls and asked, “What’s your name? Who do you live with? How old are your roommates?” When finished with his questions he abruptly went to the next group, and then the next. The teens accepted the questions politely and then went on with their conversations. This continued for the next couple days. Geoff also had many physical limitations in playing sports and with fine motor issues. Geoff, in many ways, needed more support to be successful.

In meeting with Geoff’s mother, we decided that he would be placed with the 7th graders and would have a more of a 1:1 support to acclimate to his new environment. I would also review the daily schedule with him three times in the morning rather than just once. He also knew which counselors he could ask schedule questions of. At that time, I did not know how successful this change would be. We started creating a communicative environment to lengthen Geoff’s personal interactions. His questions turned into more detailed conversations. He started memorizing information about people rather than asking them the same question again and again. Then on our second day trip, to Medieval Times, I asked Geoff to sit with the 7th grade boys. Friendships started forming! Suddenly, Geoff became G-Money. His limitations disappeared in the eyes of his peers. After he was given the name G-Money he would never again enter the teen shelter stimming.

Over the seven weeks Geoff was at camp, we created many opportunities for him that would lead to a successful summer. During the second week of camp, we embarked on a two-night overnight trip where there would be ziplining and multiple rock walls. The key to Geoff’s growth was the idea of trying. Therefore, for Geoff, dressing in rock climbing gear and touching the wall with his hand was participation. This empowered Geoff because our staff let him know that they were proud of him regardless of whether he touched the top of the wall or just the wall itself. This is when he started feeling comfortable with the idea that what he is able to do is enough to be successful. As the weeks went by he continually challenged himself, trying a little bit more each time. By the end of summer he would experience ziplining, whitewater rafting, small roller coasters, and so much more.

The teens themselves cared about Geoff and his accomplishments. They became protective and let him know that he was an important member of the group. At a food court in Washington D.C., a vendor did not understand Geoff and what he wanted. One of the 7th grade boys put his arm around Geoff and said, “Geoff, tell me what you want to eat, and we will order it together.” Then at Great Escape, a Six Flags amusement park, Geoff started jumping up and down and laughing. I saw a group of teenage girls laughing to themselves while pointing at Geoff. Before I could do anything thing a group of our 9th grade girls stood in front of Geoff to shield him from the unaccepting outsiders. Throughout the summer the teens stepped up to support their friend Geoff; not only did this positively impact Geoff, but the other campers were rewarded with seeing their own power, how their actions, their displays of support and friendship, are vital to creating a warm and welcoming community.

Geoff’s success was a team effort in many ways and I am so happy that the story doesn’t end there. Geoff will be joining us for Sunday Funday this year and then next year he will be back to Twelve Trails for what is sure to be another meaningful summer!

The J.E. & Z.B. Butler Foundation is integral to the running of our inclusion program. Thank you for making stories like this possible!

An Enriching Summer for Campers of All Abilities

Camp Twelve Trails’ inclusion program focuses on meeting the needs of all our campers by providing a supportive and caring environment. Teen Adventures, our teen