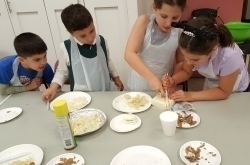 Around the World with Bubbie and The Covenant Foundation

Smearing rounds of floured dough with onion-laced mashed potatoes was the easy part. Folding the dough over to pinch and seal the ends was a messier challenge.

But into a pot of sizzling oil they all went, filling the community kitchen of the YM & YWHA of Washington Heights and Inwood with immense anticipation and the heavy aroma of sizzling piroshkies.

“I’m so hungry after school and I like to cook and bake so this is just so much fun,” said Isabelle Kustinsalee, age 8. “It just makes me want to learn so much more.”

A simply stated endorsement for sure of Bubbie’s Kitchen, an innovative new afterschool program for children up to third grade that leverages a universal love of food as a portal to Jewish identity. The program is supported with a Signature grant from The Covenant Foundation.

Every Wednesday afternoon, these young cooks mix Jewish history and culture with cooking time featuring easily executed recipes for a dish representative of the country of the week.

One week in May, Russia was on the front burner. Cyndi Rand, Jewish Cultural Educator at the Y, led young participants in a simple back and forth on Russian- Jewish culture and history.

They practiced saying new Russian words, discussed life in a shtetl, learned about contributions of Russian Jews in arts and culture, and then boasted of their own Russian credentials, like having a Russian-speaking neighbor themselves.

And then the cooking began. A potato-based recipe this week, of course, for the very good reason that it was a cheap and plentiful staple during hard times in Russia, the students learned.

The scene is repeated every week, as the Bubbie’s Kitchen flag is planted in more spots around the world and students’ self-designed passports get stamped with their own drawings and impressions.

This spring alone, besides Russia, students traveled in Israel and baked challah bread. They journeyed to Morocco and prepared mufleta, a thin yeast-based pancake traditionally eaten after Passover. And while discovering South Africa, they cooked bumwelos, a Sephardic Jewish delicacy popular there.

This Y is a natural place for the design and launch of a program of this sort. The nearly 200 participants in the afternoon program here reflect an extended neighborhood in the far northern end of Manhattan, one that is remarkably rich in ethnic, racial and religious diversity. Even among those claiming some Jewish identity, knowledge and observance is often minimal.

That presents a challenge and an opportunity, Y officials said. That is, to plant a seed of Jewish identity or values in those who flock to the center not necessarily for this at all, but for the quality and variety of programming.

“Most families here don’t even have a starting point,” Rand said. “They need to be introduced to concepts. Bubbie’s Kitchen starts with food. It’s done with passion and excitement. Food touches on all of our five senses. And when you get people’s senses involved, they come away invigorated and excited and wanting more.”

So it is that Bubbie’s Kitchen lives beyond the walls of this bustling community center and is wired to engage immediate and extended family members and create a collective experiential impact. This is, after all, not just an afterschool program, but also a family education project creating a Jewish-inspired framework to interact and learn in a welcoming way.

Each month, families receive packages with bags of ingredients, recipes and study sheets – all coinciding to specific countries explored. This way, families can replicate experiences in their own kitchens, sharing time and learning together with even a nominally Jewish hook.

“Bubbie’s Kitchen embraces a real and tangible educational vision,” said Alan Scher, Managing Director of Youth and Family Services at the Y. “Families and young people want real, they want tangible, they want an opportunity to really learn and get hands dirty together. This is Jewish education that is very strategically directed at the community that we serve.”

The family component will expand as the program continues to evolve and grow. Family events under the Bubbie’s Kitchen banner are being planned to not only deepen connections within families, but among them as well.

This summer, the Y’s summer camp – Camp Twelve Trails, north of the city – will include a Bubbie’s Kitchen program track. And at the Y next fall, each country will command four weeks of attention, a marked increase from the time that each gets now.

Kobi Cohen, an Israeli living in Washington Heights with his two sons – one in second grade and one in fourth grade – said that the program at the Y, and its reach into his home, is already paying enormous dividends.

“If it was up to my kids, we would be eating French fries all the time,” he said. “Not only is this a great opportunity to open them up to new tastes, but they are also asking a lot of questions. So it’s a wonderful opportunity for us to strengthen our family bond and grow in a Jewish context.”

Around the World with Bubbie and The Covenant Foundation

Smearing rounds of floured dough with onion-laced mashed potatoes was the easy part. Folding the dough over to pinch and seal the ends was a