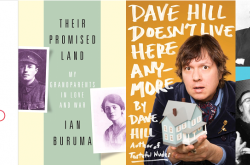 On Thursday, April 7 we will be launching a new series of author talks here at the Y!

This Spring the Y kicks off a new series of author talks. Don’t miss the launch of this new series celebrating leading thinkers and creators. All programs are followed by a Q&A, a book signing, and refreshments will be served.

Thursday, April 7, 7:00 PM — Edmund White “Our Young Man”, In conversation with Akhil Sharma
Edmund White is arguably the preeminent gay American writer. His newest novel, Our Young Man, is a virtuosic tale about the perils of beauty; a wry yet scintillating account of gay life in New York City through the disco era and into the age of AIDS. In conversation with acclaimed novelist Akhil Sharma, author of Family Life.

“Edmund White is one of the three or four most virtuosic living writers of sentences in the English language.” –Dave Eggers

“Edmund White is one of the best writers of my generation; he’s certainly the contemporary American writer I reread more than any other, and the one whose next book I look forward to reading most.” –John Irving

“A wholly understanding, moving account of what it meant to be Jewish and English in one of the most troubled times of the last century.” —New York Times Book Review

“Their Promised Land is a carefully and admirably written, highly readable work of social history told charmingly in a most intimate way through a close perusal of family correspondence. Buruma writes…with a great, sympathetic perspicacity and sweetness…” —Philip Roth

Thursday, May 12, 7:00 PM — Dave Hill “Dave Hill Doesn’t Live Here Anymore”, In conversation with Mike Sacks
In his hilarious and touching new collection, comedian and This American Life regular Dave Hill explores life after his mother’s death as he attempts to spend quality time with his father. Dave and his dad bond over everything from Led Zeppelin, kung fu, Mexican prisons, gluten, 18-wheel trucks, and a lot of the other stuff fathers and sons usually can’t get enough of. Having been lauded by Malcolm Gladwell as his “idol,” Dick Cavett as “hilarious”, and John Hodgman as a ”mad genius,” Hill upholds this reputation and proves that above all else, he knows how to tell a story. In conversation with acclaimed author/ editor Mike Sacks (McSweeney’s, The New Yorker, Vanity Fair, Esquire).

Tuesday, May 24 , 7:00 PM — David Mikics “Bellow’s People: How Saul Bellow Made Life Into Art”
Saul Bellow was the most lauded American writer of the twentieth century—the winner of the Nobel Prize in Literature and the Pulitzer Prize in Fiction, and the only novelist to be awarded the National Book Award in Fiction three times. In Bellow’s People, David Mikics, who has been hailed by Harold Bloom as one of our finest literary critics, explores Bellow’s life and work through the real-life relationships and friendships that Bellow transmuted into the genius of his art.

“Personality! Leave it to the brilliant David Mikics to find the perfect key to open up Saul Bellow’s work. Bellow is our great literary artist of Personality! Mikics himself writes with the flair of a strong and vivid personality and creates a book of high good humor that is well worthy of Bellow.” – Mark Edmundson

Books sold at Author Talks are supplied by Word Up Community Bookshop/Libreria Comunitaria.

$8 Members/ $10 Non-Members
This series is curated by Brian Garrick.

On Thursday, April 7 we will be launching a new series of author talks here at the Y! This Spring the Y kicks off a new series