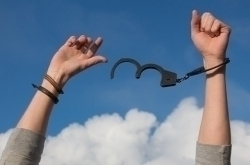 Finding Our Story in the Passover Story

One of the most ironic aspects of the Passover Seder is the supposedly simple command of Passover: retelling the Exodus story. The whole point of Passover, we are told, is that every single person participating, in every generation, should see themselves as if they are the ones living the Exodus from Egypt. Everyone at the Seder – the ceremonial feast held at the start of the holiday which includes readings, stories, and song – should experience that liberatory moment of a status change from slave to free person. Yet the Seder line up does not actually include the full story we’re supposed to tell.

The Passover Hagaddah, the text we read that guides and gives structure to the Seder, even translates to “the telling,” yet while the story is alluded to many times, the Hagaddah doesn’t give a full telling since it assumes we already know it. Instead, it reads more like a conversation among ancient rabbis who are talking about the observance of the holiday and all of the many facets that have been weaved into it. There is certainly no plot or character development. The Hagaddah is basically a commentary on the rituals and different aspects of story, but it is NOT the whole story of the Exodus.

Case in point is the omission of Moses, who, at worst, is the co-star of this story. His name and any reference to his character are completely missing from any traditional Hagaddah. From a storytelling perspective, this makes no sense. Even if G-d is really the star and Moses is a supporting actor, his absence really changes the story and the telling of it. Was Moses written out of the story? No.

Passover forces us to expand our notion of what it means to tell and retell an ancient story. In that way, Passover is not a simple recitation of a story. Remember the children’s game “telephone” where one person whispers a short phrase into the ear of the person sitting next to them and it gets passed all the way down? The Hagaddah is the telling of a telling of a telling of a telling… going back many generations. The Hagaddah, on purpose, is not the whole story. We are part of the Hagaddah. Our stories are part of the telling. We can write Moses back in if we want. We can rewrite G-d’s role in the story. We can broaden the role of women and you wouldn’t have to embellish either since the whole story depends on the bravery of a bunch of women at the beginning of the Exodus. We can open our eyes to the legacy of slavery that still exists today. That is the timelessness of Passover. The Hagaddah, if it works, should be a stepping stone not only to collective memory, but toward a vision for the future.

Passover encourages us to tell the story in a way that helps us find our own voice. If you do nothing else, at least tell enough of the Passover story to remember the feeling of becoming free. If it works, it will resonate just enough so that it feels like your story.

This year individual Y programs will be holding their own Passover Seders, however we won’t be doing a community-wide one. But not to worry, there are still Seders in Washington Heights and Inwood that are open to the community! Visit the sites below to find out what’s going on.

Finding Our Story in the Passover Story

One of the most ironic aspects of the Passover Seder is the supposedly simple command of Passover: retelling the Exodus story. The whole point of