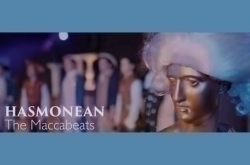 Hanukkah and Washington Heights: These are Two of My Favorite Things

There has been a convergence of local fame brewing in the neighborhood and it is time to recognize this special moment in history. And it all revolves around Hanukkah! If you are a lover of Broadway, Hanukkah, a cappella, Washington Heights or any combination of silly, inspiring, or creative music, this music video is a must-view.

If this video doesn’t immediately make you break out in a big grin, let me give you some background. It is not an overstatement to say that in the history of Broadway musicals, no musical has exploded onto Broadway and gone beyond like Hamilton has in the past two years. Writer and original star Lin-Manuel Miranda is arguably one of the hottest celebrity names in America. His fame has risen to levels that are almost unheard of for Broadway stars and his musical has made the name “Hamilton” a lightning rod in 2016. Children everywhere are singing/dueling the hip-hop cabinet meetings of 1789 between Alexander Hamilton and Thomas Jefferson. Hamilton is referenced everywhere from pop culture to the politics of the Electoral College.

That Hamilton was written and starred in by Miranda, who lives and was raised in Washington Heights and whose first Broadway hit was In the Heights, is a tremendous point of pride for our neighborhood. If you walk down Cabrini, you might just see him and his family out for an afternoon stroll. He and his cast were even asked to perform at the White House. However, Miranda and company were not the only local celebrities invited to the White House to showcase their talents in recent years…

Which brings me to the Maccabeats. Cross over to the other side of the neighborhood, past Wadsworth, over to Yeshiva University we find another musical phenomenon. YU’s world-famous a capella group the Maccabeats have revolutionized Hanukkah music and, to some extent, the convergence of Jewish and pop music. With “Candle Light,” their Hanukkah parody of Taio Cruz’s “Dynamite,” five years ago, the Maccabeats have been doing to Jewish holiday music what Weird Al Yankovic did for Michael Jackson in the mid-80’s. By changing lyrics to familiar tunes, they are bringing Jewish stories and sensibilities, with a lot of harmony and beatboxing, to a Jewish universe always in need of new life.

Although they come across as a bunch of humble yeshiva buchors (boys) in their white shirts and black ties, their YouTube videos have tens of millions of views, they are wildly popular across the USA, and they have performed internationally. Like the cast of Hamilton, they’re no stranger to the White House; they’ve performed for President and Mrs. Obama at their Hanukkah Party more than once. There has never been bigger internet music sensation in the Jewish world. And they are pretty good live too. Oh, and did I mention that at least two of the original Maccabeats have worked here at the Y?

Both Lin-Manuel Miranda’s and the Maccabeats’ fame have wildly surpassed their fields’ standards. Until now I have not been able to connect these two beyond local geography and the White House performances. Thousands of people go to the White House every year. No big deal. The George Washington Bridge literally carries millions of people in and through Washington Heights – not exactly something you can use to tie the two together. Thanks to the Maccabeats’ latest video, “Hasmonean – A Hamilton Hanukkah” I’m finally able to directly point to how these two musical sensations converge. The a capella group takes some of the most popular songs in the Hamilton score and brings the Hanukkah story alive. Using the rhythm and beats Lin-Manuel used to introduce Alexander Hamilton, they describe Judah Maccabee:

How does a Hasmo-nean,
Son of a priest and a Hebrew
Raised in a village with his four brothers
in the Judean providence…

Instead of the King of England taunting the American Colonies, the Maccabeats sing from the perspective of King Antiochus, Assyrian (Greek) oppressor of the Jews. And of course, singing as the Maccabees, the Maccabeats respond to the King with, “We are not gonna betray our G-d.” True to their inspiration, all of the songs are choreographed with the moves and outfits of the Broadway masterpiece.

This is a significant fusion that represents more than simply a good choice by a local a cappella group. Even if Lin-Manuel Miranda never sees this video (and I bet he has), this video says something about where Washington Heights now resides in the New York City cultural landscape. Admittedly, there are many Hamilton spoofs out there and probably other Hanukkah Hamilton spoofs, but this video represents, in my humble opinion, a microcosm of how Washington Heights has reestablished itself on the map. For many years we may as well have been called “Upstate Manhattan.” But in the words of Lin-Manuel Miranda, “We’re gonna rise up!”

Hanukkah and Washington Heights: These are Two of My Favorite Things

There has been a convergence of local fame brewing in the neighborhood and it is time to recognize this special moment in history. And it