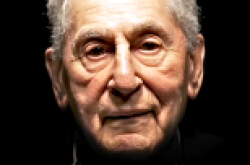 The Y Remembers a Remarkable Man with Remarkable Strength and Resilience

Recently, the Y community was saddened to find out about the passing of long time Y member and Holocaust survivor, Lou Yehuda Strauss. Lou Strauss shared many wonderful memories here at the Y. His family members mentioned during his funeral how much he looked forward to having lunch with his friends every day at our senior center, Center for Adults Living Well (C.A.L.W), and participating in different activities at the C.A.L.W until his health no longer allowed him to.

Born to the son of a butcher store owner in the village of Wachenbuchen, Germany, Lou dealt with his first adverse experience when he was only six years-old, and his father passed away on the day of Yom Kippur. His mother was forced to make ends meet, due to his father’s death, where his two older brothers, Ernst and Simon, had to help out. Despite graduating with high marks from a Jewish school at 14, he was unable to afford to attend high school and took on an apprenticeship as a diamond cutter, until Hitler came to power, where his employer was forced to let him go. He was unable to secure other employment at that time because he was Jewish.

It was during this time that his brothers, Simon and Ernst, convinced him to leave Germany. Ernst left first, to stay with a family in the U.S., while Lou and Simon applied for passports to leave for Palestine, when Lou was still only 14. With much persistence and a government bureaucrat allowing him to leave because it would be, in the words of the bureaucrat, “one less Jew in this country”, Lou was granted a passport and boarded a boat to Haifa from the assistance of the Jewish agency, Patria, where he had to leave all of this family. Simon was unable to leave Germany and was sent to a concentration camp. With assistance from the Red Cross, he was able to leave for England after the war. Their mother was transported to Minsk during the war, where she did not survive. Lou and his brothers were the only ones in their family who did.

After arriving at a kibbutz in Palestine, where he was first taught to use a gun and stand guard at the tower, Lou offered to join the British Army but was told that because Rommel was still in the Middle East, they needed to keep as many young people in Palestine, just in case. Instead, he was in charge of the machinery at one of the area’s large orange gardens. He did, however, serve as one of the first pilots for the new Israeli Air Force after the war, even though he never thought he was qualified to do so. He spent years going from junkyard to junkyard, collecting spare parts from the surplus spitfires the British left behind, which probably helped contribute to his future skills as a mechanic.

While in Palestine, he met and married his wife, Eva, in 1943, and they had their first son, David, in 1949, who was struck with polio at the age of two. His son David shared how his father would carry him on his shoulder everywhere he went, so he would not “miss out on anything”. It was at this time that Lou made the decision to leave Israel and move to New York, so his son could get the operation he needed. He requested a permanent discharge from the Israeli Air Force and received it. In 1956, his family settled in New York City, and his son was able to get the desired surgery with successful results. After settling in New York, he and his wife had their second son, Ralph.

While in New York Lou worked as a mechanic and eventually owned a gas station with a repair shop in the Bronx. Due to eminent domain, he had to vacate his business, but his competitor down the street, the only African-American gas station owner in the entire state of New York at that time, asked him to be a partner, due to Lou’s honest and reputable business practices. Lou loved anything to do with machines and computers. His sons would recall how he would complain to them that he was having a “terrible day, the worst day of his life”, because his computer was not working. He used his computer well into his 90s. He also loved photography. His brother, Simon, gave him a camera before he left for Palestine. Even though it was seized from him when he arrived there, that first camera he received sparked his love for capturing people’s moments in pictures.

While settling in the neighborhood of Washington Heights, it was the YM & YWHA of Washington Heights & Inwood, where he found a community of other German Jews and could feel at home. But what differentiated Lou from other community members was his remarkable sense of tolerance and inclusiveness, embracing the diverse and changing community in his neighborhood, when these issues were rarely discussed at that time. He was invited as an honored guest to return to his hometown village in Germany, where he enjoyed telling his story to school children there. He continued to exchange Hanukkah, Christmas and New Year’s greetings with the mayor of that town and his wife, afterwards.

He loved New York City and its abundance: In New York – you could have anything, be anything, come from nothing and have everything. The Y was, in many ways, the center of his social network. He looked forward to lunches with his friends and daily classes offered by the C.AL.W, especially the yoga classes offered for the seniors and activities sponsored by the 1933 Fund specifically designed to support the German Jewish Émigré Community. When his health no longer allowed him to participate in activities at the Y, he was supported by the services from the Y’s Hudson Community Project (Safe at Home), generously funded by the UJA Federation of NY in collaboration with the organization, Self-Help, that works with Holocaust survivors, Visiting Nurse Services, and Mt. Sinai. Jewish Holiday meals were provided by the Temple Emanu-El.

Lou Yehuda Strauss will be greatly missed by those of us here in the Y community. He is survived by his two sons, five grandchildren, and one great-grandchild. His wife of 60 years, Eva, passed away in 2003. He and other members like him are the reason why the Y continues its legacy of supporting Holocaust survivors and telling their stories. Lou was always willing to tell his story to his family, friends, and the Y staff, and we hope that we can also tell his while remembering and guarding Lou’s memory.

Rest in Peace, our dear friend.

The Y Remembers a Remarkable Man with Remarkable Strength and Resilience Recently, the Y community was saddened to find out about the passing of long