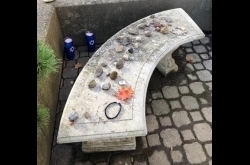 Paying Tribute to the Tree of Life Synagogue One Year Later

Last month marked the one-year anniversary for the shooting at the Tree of Life Syagogue in Pittsbugh, the worst anti-Semitic attack in the history of the United States. Twenty-one representatives from 16 different Jewish Community Centers (JCC) paid their tribute to mark this solemn event while providing support to supporters but still recognizing a sense of community and hope that has been built from this tragic event. A detailed description of this event can be found here in an e-mail message from Doron Krakow, president and CEO of JCC Association of North America.

Last year Martin Yafe, our Chief Program Officer, drove to Pittsburgh during the aftermath of this senseless and hateful shooting to pay our respects, while our CEO, Martin Englisher, provided his statement here.

On October 27th of this year Victoria participated in a deployment to Pittsburgh with 19 of her fellow Jewish Community Center (JCC) professionals from throughout the continent as part of JResponse, a program of the JCC Association of North America which brings the greatest asset of the JCC Movement, its people, to provide relief and recovery efforts after a crisis, disaster, or other time of serious need.

Victoria was among a team who staffed the JCC during the one year commemoration of the Tree of Life shooting, helping to answer phones, interact with community members, staff a blood drive, and do whatever else was needed so the local staff could be free to grieve and reflect with their community. Victoria’s poem reflects the deep impact the JResponse deployment had not only on the Jewish community of Pittsburgh, but on the JResponders themselves.

Jewish text reminding us not to be a bystander to evil

Commandment to be inclusive and caring

Memories of those who perished in tragic violence

My time out- to cry in the bathroom

Vulnerability of old age, dependency and plea for kindness

They could have been among those Eleven

One married at the Tree of Life just two years ago

One disabled after being shot in his left hand

Strangers streaming in, patiently waiting on line of three hours, attempting to find meaning and hope that their blood will give life

Pouring gratitude for our service, for realizing that some have travelled from other states and even countries to be there for Pittsburgh

Humor and jokes, stories about the neighborhood, childhood memories

Maybe because they were forever remembered

By Twenty J Responders and by many others

Long wait for a delayed flight

Streaming of the commemoration ceremony

Can we forgive ourselves for being alive

Can we rejoice of being alive

Can we not hate

Paying Tribute to the Tree of Life Synagogue One Year Later

Last month marked the one-year anniversary for the shooting at the Tree of Life Syagogue in Pittsbugh, the worst anti-Semitic attack in the history of