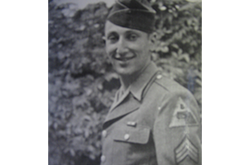 Before the start of the COVID-19 outbreak, the Y asked longtime member, Walter Kehr, to speak at the Center for Adults Living Well @ the Y (CALW) commemoration of the 75th anniversary of Victory Over Europe Day (VE Day) to share his first-hand experiences as a member of the United States Armed Forces in Germany on this momentous occasion.

While the Y’s in-person celebration has been canceled due to the pandemic, Ann Votaw, CALW director of Health and Wellness, caught up with Walter, who felt honored to share his experiences with the community.

Walter, who turns 95 this August, has lived in Washington Heights since age 12, when he and his German-Jewish family fled Nazi persecution in his birthplace, the Rhineland-Palatinate city of Worms.

As World War II raged, Walter was drafted into the United States Army, experiencing combat and participating in the Battle of the Bulge — defending the Allied Forces in the last major German offensive campaign. On May 8, 1945, he witnessed Nazi Germany’s surrender on VE Day.

“During combat time, when the shooting was going on, it was, ‘Look out. Here we come,’” said Walter. “I had to rely on my buddies, and they looked out for me. I had very little time to figure things out. Once the war was over, we were slapping each other on our backs. We were relieved and relaxed.”

Walter was the only company member who spoke, read, and wrote German. He was promoted to sergeant and put in charge of the civilian population in Bad Lauterberg, where he was known as the burgermeister, mayor, and had an office across the street from the town’s real mayor. Among his duties were communicating with local officials and townspeople, and identifying Nazis.

“When we came in, people had not seen young men in four years,” Walter shared. “There only were girls, women, and old men. Fraternizing with local women was strictly forbidden, but everyone ignored the orders, including officers.” His unofficial role was to set up US soldiers on dates with German women. “I did that with pleasure,” Walter recalled with a smile.

Four months after his arrival in Bad Lauterberg, Walter was transferred to Pilsen, Czechoslovakia, to separate prisoners of war who had joined the Nazi party before 1938 from those who joined after. It was here that he felt he offered his best service to America, his adopted homeland, as he felt he was able “to manage peace and contribute to something factual.”

Walter was a member of the Y before World War II, when it was located at the present-day site of the George Washington Bridge Bus Station, and he’s been an active member at our current location for decades, increasing his involvement in activities after the death of his wife.

“I am eternally grateful to the Y, because both of my children went there when they were young,” said Walter. “When my wife passed away, the Y kept me sane and active. Little by little, I was myself again, because there was always something to do.”

Walter is looking forward to returning to the Y after the pandemic.

Before the start of the COVID-19 outbreak, the Y asked longtime member, Walter Kehr, to speak at the Center for Adults Living Well @ the