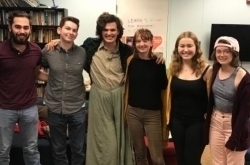 Strengthening Camp Twelve Trails’ Jewish Identity From the Ground Up

The Talmud recounts that “Every blade of grass has an angel standing over it, whispering ‘Grow, grow.’” The religious text’s message, relating the one-to-one devotion paid to every living being, has become the inspiration for Camp Twelve Trails’ new AWE – “Angel Whisper Educators” – fellowship program.

Rabbi Ezra Weinberg, who is Camp’s Jewish Educator and is responsible for shaping the Jewish character at Twelve Trails, explains the goal of the program is to strengthen Camp’s Jewish identity by having a choice group of counselors acting as the camp’s “angels.” These counselors will interact with each camper (“every blade of grass”) on an individualized basis, sharing personalized Jewish content aligned with Camp’s universarlly-shared Jewish values. To spearhead the program, Rabbi Ezra recruited six counselors who were influential in their local Hillels and have experience in Jewish education and outreach.

“In the past, we’ve primarily depended on specialists to implement Camp’s Jewish values. Now, we are also bringing counselors who are Jewishly educated to bring their experience, excitement, and Jewish journey to camp,” shares Rabbi Ezra.

The program will be structured by matching one AWE Fellow per Tribe (or unit). The Fellow assumes responsibility for impacting camp culture on a Jewish level, by introducing new Jewish-themed cheers and characters, by sometimes leading Boker Tov and leading one Shabbat, and by discussing the Jewish camp values rooted in their own personal experiences.

“One of the things that makes Jewish camp special is the creativity that’s unlocked,” says Rabbi Ezra. “Something almost magical can happen on campgrounds when you get so much creative energy flowing. Here, you can build traditions that stick year after year.”

The AWE Fellowship program is intended not only to influence campers, but to create Jewish leaders, as well. The Fellows will live together in a dorm, allowing them to foster connections within their own group, and to collectively brainstorm how they can positively influence the Jewish identity of the campers and counselors around them. “Camp isn’t just for the campers,” explains Rabbi Ezra. “We’re also focused on helping counselors develop their leadership skills.”

The AWE Fellows know that this summer presents a challenge; influencing camp culture takes time. Yet, Rabbi Ezra and his Fellows see and accept this challenge and plan to use it to fuel their creative thinking and innovation. Just as one cannot watch grass grow millimeter by millimeter, the Fellows know their influence won’t be fully realized until the end of this summer, or maybe even next. Whatever the rate of growth, the Fellows look forward to the eventual development of Jewish experiences and camp traditions directly stemming from their dedicated actions and whispers to “Grow, grow, grow!”

Strengthening Camp Twelve Trails’ Jewish Identity From the Ground Up