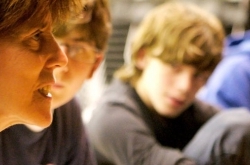 Thank you for your light and love, Liz.

A renowned, award winning composer, writer and director, a passionate advocate for human justice and human rights, a caring and emphatic person, who despite her painful life experiences, brought hope and light to the world- those are only a fraction of words that describe Liz.

In 2009 Liz opened her soul to the Y community. Taken by the idea of a project dealing with horrific story of Holocaust while celebrating the spirit of survival and togetherness, Liz rigorously started composing an original musical “Sosúa: Dare To Dance Together”. Excited by the opportunity to return to working with her favorite teen population, she selected the crew of 20 Dominican and Jewish residents of Washington Heights. Each of the participant has been personally touched by Liz; each was encouraged, nurtured, inspired, challenged ,loved, taught, believed in.

Liz’s words” Don’t ever underestimate children” became a motto for her work at the Y.

Under Liz’s guidance the teens composed, created, wrote, cried, shared, laughed and formed a powerful connection with each other. By co-writing the ever evolving script they became confident and talented creators, by performing and speaking publicly they became powerful ambassadors for peace and justice.

The transformation of the theater group led to a transformation of the Y and of the community as a whole. By expressing gratitude to the Dominican community for welcoming persecuted Jews from Easter Europe in the World War II , by condemning genocide and racism through music, dance, tearful monologues, the community was brought together . The Y with its long history of welcoming the community became an international model for diversity, Holocaust education and genocide prevention. Due to the universal themes of the play, Sosúa and the Y became known in the Dominican Republic, in Israel, in Russia, in the United Nations and Europe.

Captured by the talented filmmakers Peter Miller and Renee Silverman in their award winning documentary “Sosúa: Make a Better World”, Liz’ light shone on the teens, on the Y, on the staff who has worked with her, and on to each viewer. The film was shown at various festivals, and national public channels. It became a teaching tool with a downloadable curriculum for those who deeply care about making a better world, leaving a legacy for the Y.

Read more about Liz and her life’s work at the links below.

Thank you for your light and love, Liz.

A renowned, award winning composer, writer and director, a passionate advocate for human justice and human rights, a caring and emphatic person, who despite her