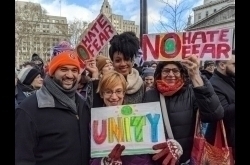 We Are Never Alone When We March For Justice and Unity

People have been saying that antisemitism has hit an all-time high but do statistics agree? Unfortunately yes. According to ABC News and The ADL, The Anti-Defamation League, comparing the antisemitic hate crimes in 2014 to them in 2018 the statistics show a forty percent increase. In addition, in 2019, although the results are not entirely finalized it appears that the hate crimes against Jews have increased another twenty percent. In 2019 the preliminary data shows that New York faced the most hate crimes against Jews since 1992! These statistics have incited fear in many American Jews causing them to have the desire to hide their Judaism. Although these statistics are frightening we must stand strong together with Jews of all denominations and fight and show our pride for our culture, religion, and race.

“Having taken a leading role in many other social movements such as the Civil Rights Movement, the LGBTQ community and the Feminist awakening, this time it was us, the Jewish community of North America who was crying out to our neighbors and friends to come in support of our right to live and express our identity publicly; to live in this country as Jews. And boy was the call heard! It was incredibly moving to see the hundreds of people of diverse backgrounds gathered last week at Mt. Sinai Jewish Center in the vigil organized by Congressman Espaillat to reaffirm their commitment to the safety and wellbeing of Jewish families living in Upper Manhattan. And it was beyond overwhelming to see and feel the magnitude of support received during the solidarity march against hate and fear this past Sunday,” says Martin Yafe, the Y’s Chief Program Officer.

On Sunday, January 5th, upwards of twenty-five thousand members and allies of New York’s Jewish community joined together in a solidarity rally against anti-Semitism and hate in all forms. Meeting in Foley Square in Lower Manhattan and marching over the Brooklyn Bridge, the rally represented a powerful communal response to the recent spike in hate crimes against the Jewish Community in the New York area. The rally was organized by the UJA Federation, JCRC, AJC, ADL, and NY Board of Rabbis in under a week.

The Y put out a call to all of our families and participants to join in this effort and to stand up against hate in all its forms. We were delighted that many of our staff also heard the call and felt inspired to rally together. One of them was our talented After School art specialist, Cynthia Jabbar, who worked with her students to make signs for the rally.

Although the march was triggered by the spike in antisemitic hate crimes, the number of allies from other faith traditions was significant, including within our own staff. “It was a highly diverse crowd within and beyond the Jewish community,” commented Laura Sanchez, the Y’s Assistant Director of Early Childhood. Sanchez spoke about what she saw: “We saw Hasidic Jews, Reform Jews, signs that read “Muslims against Anti-Semitism” and “Christians against Anti –Semitism.” The message was clear. Despite the headlines, hate crimes are not simply a ‘Jewish problem’ and cannot be seen as such”. When Sanchez was asked why she chose to attend this rally, she said, “Nowhere else would I choose to be.” Nicole Bryant, Director of the Y’s SONYC After School program for Middle School at Columbia Secondary School remarked, “I’m glad I was able to attend. I’m upset by any community being targeted in this way. I don’t want this to be the new normal, especially not for the kids we work with.”

As reflected in the Y’s signs, the march took on the slogan, “No Fear / No Hate.” With hate crimes on the rise in the US in the last few years, we are proud of the display of solidarity and courage by our staff and all the Y participants who attended.

For more information about the rally itself and who the speakers were, check out this article in the NY Times.

To see a live-action and singing clip from the march which features Reizel Halikman, the BeMe K-2 Assistant Director click here.

We Are Never Alone When We March For Justice and Unity