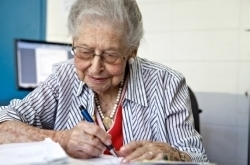 Yesterday we lost a dear and beloved member of the Y family, Rita Rosenthal. In her 108 years she held many titles: Holocaust survivor, German immigrant, Washington Heights resident, wife, jewelry businesswoman, mother, and grandmother. The Y was fortunate to also call her board member, bookkeeper, volunteer, and member. We will remember Rita for her devotion to others, her fight against adversity, and her strength, to name a few of her inspiring traits.

We’re thankful for the 40+ years Rita spent bringing light to our Y community. After retiring from the small custom jewelry business she had run with her husband, she bumped into a neighbor who needed help getting to and from the Y. Rita started helping her attend lectures and was soon volunteering five days a week. She eventually went on to serve on the Y’s board. When, at the age of 100, Rita thought the evening board meetings had become too much, she retired from the board. However, she continued to volunteer at the Y, helping the Center for Adults Living Well with book keeping and administrative tasks. More recently, she maintained her connection to the Y with her regular bridge games.

We are grateful that Rita chose to share so much of herself with the Y, and we hope we are able to bring her as much joy as she brought us.

As part of National Volunteer Appreciation Week, in 2013 Rita was recognized for her decades of supporting the Y at UJA-Federation’s Volunteer Recognition Ceremony. We are reposting this piece, originally published in April 2013.

At 102, A Holocaust Survivor is Still Giving Back to the Community
Meet Rita Rosenthal: a Washington Heights resident of 56 years, mother of two, grandmother, and a regular volunteer at the YM&YWHA of Washington Heights & Inwood. Rita is also a 102 year-old Jewish Holocaust survivor.

On April 22nd, as part of National Volunteer Appreciation Week, Rita was recognized by the UJA-Federation, nominated for her invaluable contribution to the Y spanning almost 30 years. She was greeted with a standing ovation for her outstanding work. “I enjoy, number one: to be useful to an organization, and number two: the friendliness,” says Rita.

Rita was born in 1910 in Germany. She recalls a time where things were normal. “When I was a teenager, it was completely different. You didn’t ask ‘Are you Jewish or not Jewish?’ You had [regular] contact with people.” She remembers going to school with Catholic and Lutheran children, without ever being questioned on her religious background. But life got more tough as the Nazi party spread through Germany. Her need for work drove her to move to Berlin, where her employer, also a Jew, was eventually forced to shut down his business. Slowly, Rita saw everything being taken away from her; from her job, to her home, and eventually her family. Signs like “Jews and Dogs not allowed” hanging in store windows sent Rita a very clear message: she had to get out of Germany. In 1937, Rita fled with her 16-year-old brother to America, and settled in New York. She eventually met her husband here, also a Holocaust survivor from Germany, and together they started a family and a new life.

Instead of letting the bitter memories of a hard life bring her down, Rita has become a pivotal personality at the Y, giving back to her Washington Heights community. “I’ve met many people and even friendships have developed.” Rita has not only volunteered at the Y, but she has also served on the board. Now that she is more than a century old, Rita has reduced her volunteer service to 500 hours per year, but the Y still relies on Rita to perform crucial administrative tasks for the Center for Adults Living Well @ The Y. She is described by Martin Englisher, Executive Director at the Y, as “the matriarch of our Y. We love her and thank her for all she has done.” By managing membership data, coordinating special events, and performing many other duties, she contributes to the welfare of her peers. The entire Y community appreciates Rita’s sheer determination and concern. “I enjoy doing it and I’m very, very happy and thankful that I can still do something [to help].”

Yesterday we lost a dear and beloved member of the Y family, Rita Rosenthal. In her 108 years she held many titles: Holocaust survivor, German