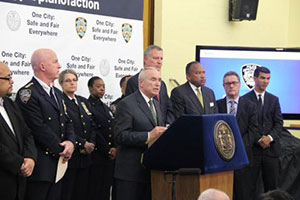 A New Leaf for NYC Law Enforcement Announced at the Y

On June 25th, the Y was honored to host a press conference for New York City mayor Bill de Blasio and NYPD Commissioner Bill Bratton announcing the City’s latest NYPD initiative, One City: Safe and Fair Everywhere. Over the next year, the NYPD will be introducing 1,300 new police officers to the force, strategically placing them in communities to build relationships with local residents which will in turn hopefully eliminate crime.

The Washington Heights community was one of a selected few NYC communities that have been acting as a pilot for this program. Over the past month, our community has seen a significant decline in crime, a true testament to the success and power of this program. “We are now doing a bottom-up approach” said the mayor, “where the officer knows the community and the community knows the officer, and we stop the problem in many cases before it even happens.”

In his introductory remarks, our CEO Martin G. Englisher proclaimed his support of the NYPD and its new initiative. “In the past 20 years, crime is down 95%, and that means so much to us as community leaders” said Englisher. “This new initiative brings the community and police officers together in ways we’ve never done before. There is exceptional training being done. The ways that commissioner Bratton is doing that is different than I’ve seen before; it is refreshing. We are welcomed to be in the room to sit there and be a part of seeing the officers get trained and to contribute to the training really makes a difference.”

The mayor had some kind words for the Y before he spoke about the new initiative. “A lot of people in this community contributed to that progress. Marty you did for sure, and this organization, (the Y)  did. I heard a wonderful story about not just one, but a number of young people who got involved in this organization as youth and become so invested in the future of their community they later chose to become police officers, and that is an amazing reality. I want to thank you Marty from the beginning because your commitment, this organization’s commitment, what it’s meant for the safety of the community, what it’s meant for helping some of the most committed young people from this community join the force and contribute to our ever-growing safety, that is an amazing story unto itself.”

Mayor de Blasio, Commissioner Bratton and NYPD Chief of Department Jimmy O’Neill then went on to unveil the new One City: Safe and Fair Everywhere. The crowd of reporters was introduced with many facts and statistics about where the NYP has done well, and where they could be doing better. Chief O’Neill went through an impressive and detailed website for the program, http://www.nyc.gov/html/nypd/html/home/poa.shtml.

The history of the Y’s relationship with the NYPD is a long one, with the most notable piece starting over 20 years ago.

From 1994 to 2006, Martin Englisher ran a program at the Y for young Police Academy cadets. The Police Academy required a large number of community service hours for anyone who was interested in entering the training, and the Y provided meaningful internships for the cadets to fulfill that requirement.” We trained 350 cadets over 11 years in community work, helping to serve the seniors and young children”, says Marty.150 became cops and 2 are now Commanding Officers, with many being supervisors and Detectives. Almost all were people of color, many of Dominican descent. Soon, same cadets became part of 33 and 34 precincts, which was not the case at that time. It now the majority of both precincts.”

It is the Y’s sincere hope that this program brings success to the fight against crime to the whole city like it has to our neighborhood. Below is a collection of pictures from the event.

Read about the announcement in the New York Times.

A New Leaf for NYC Law Enforcement Announced at the Y

NYPD introduces Once City: Safe and Fair Everywhere Program On June 25th, the Y was honored to host a press conference for New York City